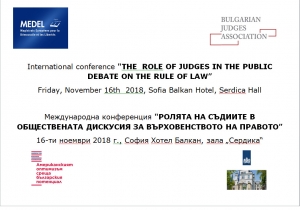 MEDEL Statement on the EU Commission’s decision on bringing Poland to...